“My girlfriend wanted to get a dog and I was just supportive of that.

I wasn’t 100% sure of whether we were settled enough in the apartment, but I left the decision making to her.

She chose the breed, the breeder, and Anchoas.

Honestly, I am out of town a lot for work, so I knew she would be more of the caretaker than I would be.

I also feel like I can fall in love with any dog.”

“I knew that Mitzi (border collie mix) was getting older and I couldn’t imagine a future without a dog.

I had met a shih tzu poodle mix that was a good size for traveling and I heard they got along well with older established pets.

I visited the breeder in Canada and came back to my car with a teacup sized puppy. I drove all the way back to New York with Ollie spooning Mitzi on the back seat.  It was a seven hour drive.

Mitzi embraced and accepted Ollie right away. I loved watching the two of them play together and become great companions.

Ollie extended Mitzi’s life for another two and a half years.  He brought joy and play to an old girl.  Mitzi was fifteen, arthritic and mostly blind.

She had been abused as a puppy and was left to die in a dumpster.  All her bones were showing and her tail was hairless.  I wondered if she was the kind of dog that should have had her tail cropped.  Before we named her she was called dumpster dog.

We called her Mitzi because she had little white mitten markings on her paws.

At first she was terrified of everyone and everything. She was afraid of life.  The first little while when I tried to pick her up she cowered.

I helped her overcome her fears by holding her in my arms, rocking her back and forth and whispering her name over and over.  I tried to soothe her like a baby.

When she died, seventeen years later, I whispered it’s okay, and I love you.  There were four of us sitting around her in a circle at the vet’s.

Mitzi saved my life.  I went through cancer, a divorce, empty nest, moving from the suburbs to the city and more.  Every day I had to get up to walk her.  I don’t know what I would have done otherwise, but she took away that option.  At night, alone in bed, I would put my hand on her chest and     would breathe in tempo with her .  She helped slow my racing heart and allowed me to fall asleep.  Mitzi helped me get through years of fear.  She was smart, gentle, trusting and loving. 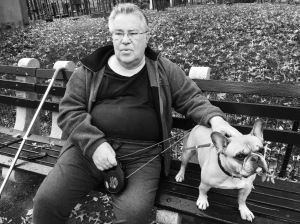 Georgia practically lives with me, but she’s not mine.  She loves me and I love her.

The Dr. told me I have to walk, and I walk with her.

I wasn’t able to walk at all, I was in the hospital for three weeks from my sciatica, but, I got up to walk her.

I meet people all the time with her.  If I have a dog with me, they say hello, without Georgia, no-one says, hello.

She is stubborn and delicate at the same time.

If she poops in the house, she rolls her eyes, and says, that wasn’t me.

Summer is sun and winter is snow.  She loves them both.

She knows, she has to be good for her treats.