“Two of the dogs that I have a deep connection with are Carter and Rocky.

I have been taking care of Carter for 3 1/2 years.  I met him when he was 6 or 7 months old.  He is a very sweet dog–  it’s the way he interacts with dogs and people.  When he meets dogs and people he puts them at ease.  Even though I can tell he’s excited, he gets low to the ground or finds a way to be non-threatening, and patiently lets the other dog sniff for as long as it takes for the other dog to be comfortable.

He seems to be able to judge if a person is interested or unsure or afraid.  He matches people’s behavior.  If someone is interested, he approaches them right away, but if someone is sure or afraid, he gives them their space and lets them be.  He’s always up for a good time.  He adapts to any situation.

I brought him home with me for Christmas, which involved a car ride with my siblings who he’d never met and then meeting my human, canine and feline family in a new place in the suburbs.  He had a blast and chimed my family completely.

The one split second where he lost his cool, and gave in to his dog instinct, he tried to play with the cat.  The cat was having none of it and fled.  Carter went back to socializing with the rest of us (humans) and new dog friend, unphased.

I started walking Rocky at the same time as Carter and we just clicked right away.  He had a lot of energy and was very outgoing.  He seemed as excited as I was to go out on the streets of NY and see the sights.  He was my co-pilot.  I took him on multiple guided walking tours of Central Park through the Conservancy.  I would keep him out for entire afternoons even if he was only scheduled for a short walk.  I even once asked his owner to bring him to a dog luau that I was bringing Carter to, so that I could hang out with my dog friends on the weekend.

Last Spring Rocky started knuckling under with his hind right paw.  That leg continued to get weaker.  Eventually, he was diagnosed with a degenerative spinal chord disease.  He got around on wheels for a few months, which meant he could still find grass to graze on and patrol for squirrels.

The disease was progressive and incurable and ultimately took his life.

It was an honor to help his family take him to the end of his journey.” 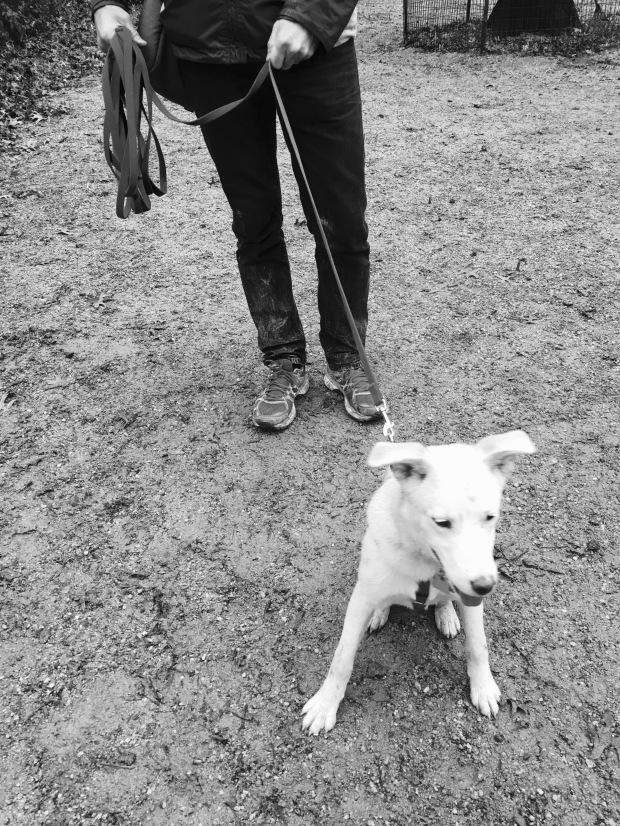 We got Trudie 3 weeks ago at an adoption fair, of all places.

It seemed like a good length of time to have waited.

Having a puppy has been a big learning experience and a lot of hard work.

People say dogs are in the moment, so there’s no point in being upset when you  come home and see your speaker cables chewed up.

The worst thing she’s done is chew a hole in my wife’s expensive 14 x 12 rug.  The hole is about 4 inches square. I told Trudie off, to be honest. You’ve got to seize it in the moment otherwise there’s no point.

She does make me laugh.

While out one night walking in the rain, she was sitting on the curb and sniffed at a puddle in the gutter.  She fell right in landing belly-up. She shook it off, and I got a laugh.

“Oliver is 15.5 and he has 3 teeth, but he manages to eat whatever you give him.

He has issues with his back, but seems to love the stroller.

Cash is about 8.  He just showed up at our horse farm in Florida. He had been wandering on the streets and a friend saw him. She was going to take him to a no-kill shelter, but brought him to my farm first.

I had just lost my last Jack Russell, and I said, “well, just leave him and I ‘ll take him.”

When I took him to the vet, I was told the poor dog had been shot and there was a BB in his head.

I wanted to call him Chance, because he showed up by chance, but my daughter said, “it’s Johnny Cash– the man in black’s birthday, so you have to call him Cash.”

Oliver perked up, having another companion and everything was wonderful again.

When we sold the horse farm and moved to the city it was a difficult transition. They were used to being off leash all the time.

Cash wanted no part of the leash lifestyle.

The first time off leash he ran away in Riverside Park.

I used to carry pieces of steak with me to get him back.

As time goes by, he seems to adjust to city life.”