“Elmo and Frida were found abandoned and locked in a condo complex in South East Los Angeles during a 110 heat wave.

They had no food or water for a week and no-one paid any attention to them.

I had cats, and my cat sitter noticed them there because she had a client in that building.  She inquired about them and nobody knew anything.

She sent out an email to all of her clients in search of a home to see if someone could adopt them together because they were already so  bonded.

That same week I had decided to move to New York from a large house and a yard, to a studio apartment.

I decided to adopt them.”

“Sandy is a fun dog to come home to.

She always wags her tail to greet me.  We have our moment together and then we usually go for a walk.

I don’t have children, but there are obvious parallels.

I have re-prioritized my life.  Sandy has made me a much better morning person.  We have  both learned to compromise.

If you give in to your dogs every request and desire that is not an ideal relationship– then you become the pet and she is the master.

We have an understanding.

Every bath comes with lots of treats.

The pros far outweigh the cons.” 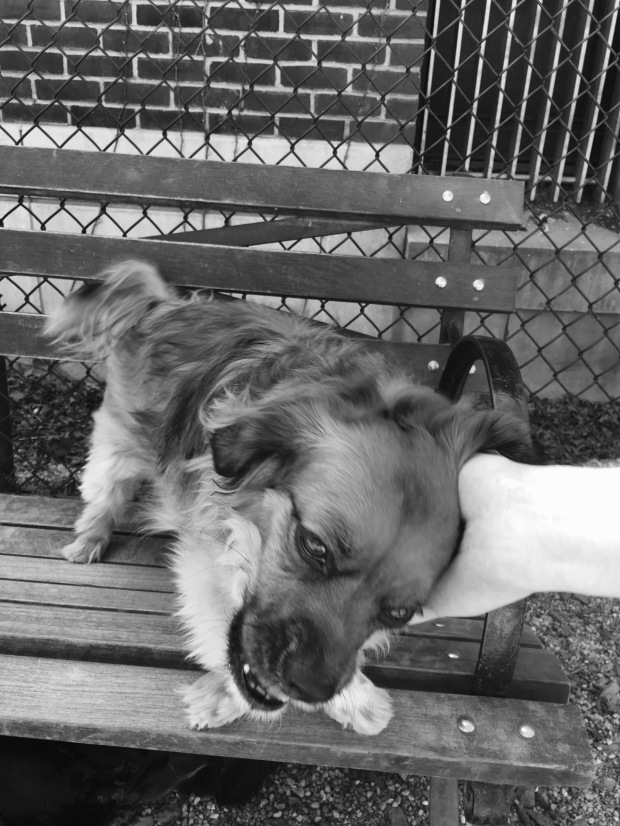 “She’s noisy, but not in a balky way.  She’s got a full range of growls, snorts and other sounds.

She likes to remind you that she’s there by either making noises (ranging from a purr to a bark), or snuggling into you.

The complications  of adopting a dog whose history is unknown and figuring out her quirks can be difficult.

She can be possessive of things, which leads me to think maybe she was on the street and had to fight for something, anything.

She doesn’t show signs of abuse but she has some anxious habits (like all her unusual sound effects).” 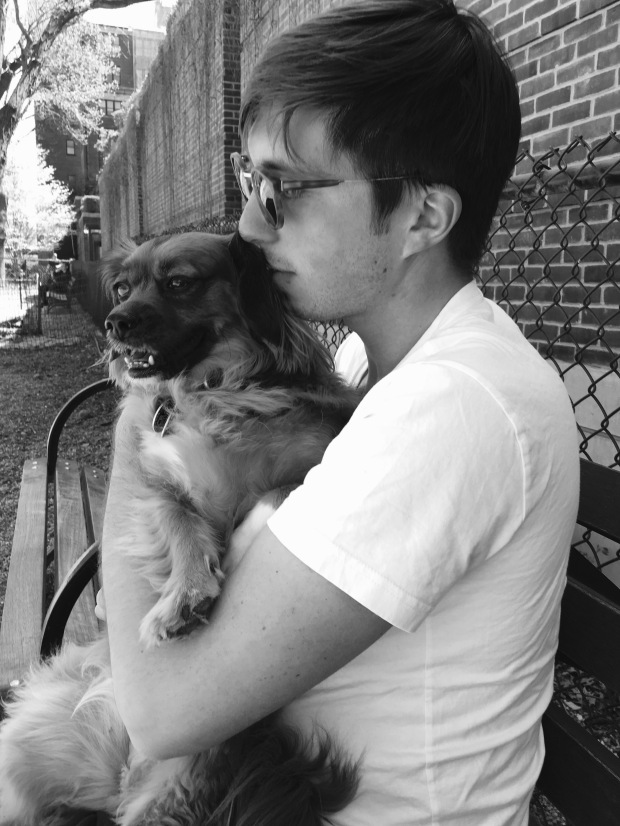 “I was thinking to adopt in August of 2013 but I didn’t really know what I wanted.

I stopped in to a shelter just to see what the process was and they were taking Sandy for a walk, so we had a chance meeting.  I was with a friend and a roommate and we were all taken with her.

I didn’t know what I was looking for in a dog, but she was the right size (I think of her as the biggest small dog).

She has a ridiculously cute underbite, her legs turn out, she has one white paw and she was immediately warm towards us.”

“I had another fospice (foster/hospice) dog through Second Chance.  She was older and so easy going.

Basically fospice is a dog that has been diagnosed with a terminal illness or a really old dog.

Both are hard to get adopted.

After the last dog, Maddie, passed away (she was old and had a problem with her spleen that was not treatable), we got Beau.

I saw him on fosterDOGSNYC.org and thought he looked like a nice little old man.

It said he had a heart condition and was around twelve.  I contacted fosterDogs and filled out an application.

“Theodora was the right size because she was small, and she had hair not fur, which made her hypoallergenic.

Taylor, my younger son, six at the time, took one look at her and said, mom, she’s a cute little blonde, just like my friend, Theodora.  So, we called her Theodora.

Clearly, Theodora had been trained to walk on a leash and do her business outside.

While she was well trained to do her business on the leash, we soon learned she had issues with other dogs and men.

She wags her tail and pretends she’s friendly and nice and then proceeds to peel their face off and attack.

I don’t let her interact with other dogs.  That’s my solution.

As far as men go, she has great instincts.

A strange man approached and tried to pet her and she growled fiercely.  I just let her.         She was right,  He was a creep.

If one of my boys is sick or sad, she’s their comfort.  They find solace in cuddling with her.

That’s a huge contribution to the family.” 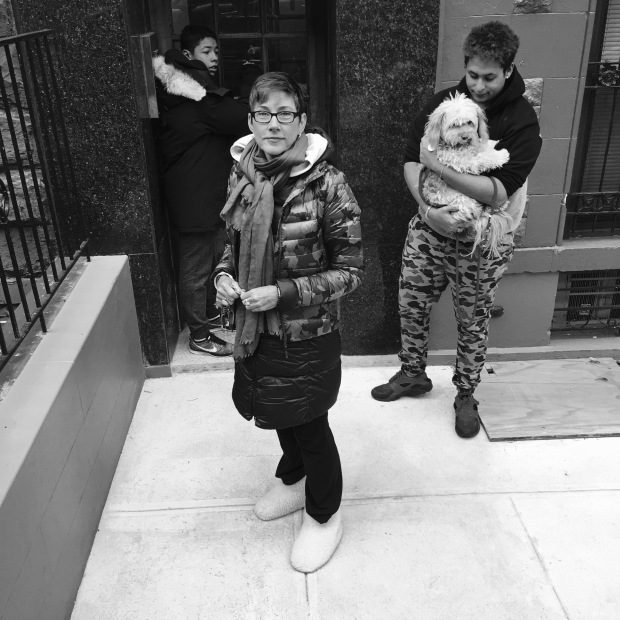 “I had a Portuguese Water Dog with my kids and ex-husband.

When I left the ex, we had to have a dog to make our family complete.

Aaron, my older son was eight years old at the time.  He brought Bruno to a play date.  He wanted the responsibility of walking Bruno, so I let him take the dog.  This wasn’t the first time.  Aaron was a very responsible child. While Aaron was walking Bruno he let the leash out too far at the corner.  Bruno was in the gutter and a taxi came speeding along and ran over the dog.

That was so intense.

He ran after the taxi.  The taxi driver hadn’t even registered that he had hit a dog.

The mother supervising the play date rushed Bruno to the vet, but it was too late.  Bruno had died.

That night we sat around Bruno’s bed as a family.  The mom and Aaron’s friend were there too.  We performed a memorial service to Bruno.

We told stories about Bruno.  We thanked him for being in our lives and then released him into the universe.

I think that memorial service helped Aaron. The main thing I wanted him to know, was that it wasn’t his fault.

Shortly after we lost Bruno, the kids had a winter break and we were in Los Angeles visiting my family.

Our quest became visiting every animal shelter to find a new dog.

Because of Aaron’s asthma it had to be hypoallergenic.

We hit every shelter between Palm Springs and L.A., with no luck.

The day we were leaving I found a small animal rescue group in Venice, and literally hours before we boarded the plane back to NY we found Theodora.”

“We were going to get a kitten, but the animal rescue group said we would have to take two so they would have company and learn to socialize.

We were also looking for dogs because we weren’t sure what we wanted.

We looked at forty pages of puppies on Petfinder.

Laura was just so cute. She had ten siblings that were all very cute. Her photo was the weirdest of them all.   She had big eyes and her face looked squished.  They all had the same face, but different markings.  Some were spotted and others were just one color.

We fell in love with what looked like eyeliner around her eyes.  It looked like she had raccoon eyes when she was a puppy.

Social Tee’s is the rescue group we limited our search to.

They were having two event on opposite sides of the city on the same day.

I am more of a dog person, but my boyfriend wasn’t as sure. His experience was just with cats.

I had been putting for a dog and it seemed like more fun to see the puppies, because they are more interactive.

Once we saw the litter, the others were sleepy and dopey, but Laura was alert and climbing over the others.  She seemed the healthiest.

She pee’d on my boyfriend as soon as he picked her up and we decided that was a sign that she was meant to be ours.

They also told us she wouldn’t be more than 35 pounds and she’s 80 pounds. They told us she was a beagle, border collie, lab mix.   They forgot to tell us about the Great Dane, Ridgeback and Hound.”

“I had a shepherd mix named Obie (from the photo album). I adopted him in 1997 when he was about ten and a half months old.

He was the love of my life.

He was diagnosed with lymphoma in March of 2012. I tried to extend his life with chemotherapy but it didn’t work and he died in May.

I was pretty down, but I decided to get into rescue and save dogs that would be otherwise killed.

I rescue dogs that are in San Bernardino, California.  I will see the dogs on the euthanasia list and there is a team out there that does all the rest.  I pay all the bills.

I went out there to see the dogs that I had rescued.

While I was out there visiting, I met Carlo, a seven and a half month old puppy on the euthanasia list, who looked just like Obie.  I also met and fell in love with a nine year old dog, Rusty.

I saw Carlo’s photo on the urgent kill shelter list. He was supposed to be destroyed in 24 hours. I was struck by how much he looked like Obie.  His tail was the only thing that was burry in the photo. I like to think it’s because he was wagging it.

Rusty was nine and no-one wanted him.  He was a senior, sick and a fear nipper.  I knew that he would require love and patience.

I adopted them both and we all flew back to NYC together.

Carlo trusted me right away but Rusty took a while longer.  One day after a year and a half he just walked over to me, jumped on the sofa, put his head on my lap and went to sleep.  From then on he never tried to nip me again. He followed me from room to room.  It was all about the love.

These are dogs that would almost certainly be killed because of the overpopulation of dogs. There are many purebreds, as well as mixes that have so little chance. The shelters are underfunded and overcrowded.

The kill shelters have an extremely high kill rate.  There is a tremendous spay and neuter problem in California, and San Bernardino, in particular.”

My motivation to save all these dogs was because of trying to save Obie, but not being able to.”